Columbia is a place unlike any other—full of traditions shaped by our history, our city and by students like you, who infuse our community with energy and perspectives from all around the world. Below, you’ll find just some of the one-of-a-kind moments and opportunities that await you.

I lead trips for Urban New York, a fun tradition every semester. Whether it's a Broadway show or a basketball game at Madison Square Garden, the trips are completely free, and Columbia even provides us with MetroCards. I get to meet new classmates while exploring the city!

Every year, staff and administrators serenade first-year students with the Columbia fight song as they enter the gates of Columbia University at 116th Street during the New Student Orientation Program (NSOP).

The Owl and Alma Mater

Legend holds that the first member of the incoming class to find the owl hidden on the statue of Alma Mater in Low Plaza will become the class valedictorian.

A chance to blow off a little steam before spring finals, the annual day-long festival brings premier musical acts to the community and has featured performances by AlunaGeorge, The Chainsmokers, Ty Dolla $ign and Columbia alums, Vampire Weekend.

At the first snowfall of each year, the students converge on Low Plaza for a friendly, free-for-all snowball fight under the watchful eye of Alma Mater.

Every fall, this 5K fun run draws hundreds of students, faculty and staff for a beautiful early morning run from College Walk, through Riverside Park along the Hudson River, down to 96th Street and back again.

As the school year winds down, Columbia's top-ranked Dining Services pulls out all the stops for Surf & Turf & Earth, featuring lobster tails, steak and literal boatloads of shrimp. Students are advised to come hungry!

Every October, thousands of Columbia alumni from every corner of the world return to Morningside Heights to celebrate Homecoming—a weekend full of fall festivities that culminates in a football game between the Lions and an Ivy League rival.

Held each fall on the South Lawn, the RHLO Send Off brings together undergraduates from Columbia College, Columbia Engineering and Barnard College for games, carnival-style refreshments and even some inflatables.

This annual event unites Indigenous communities and their friends and allies to celebrate and honor their identities through dance, song and socialization. 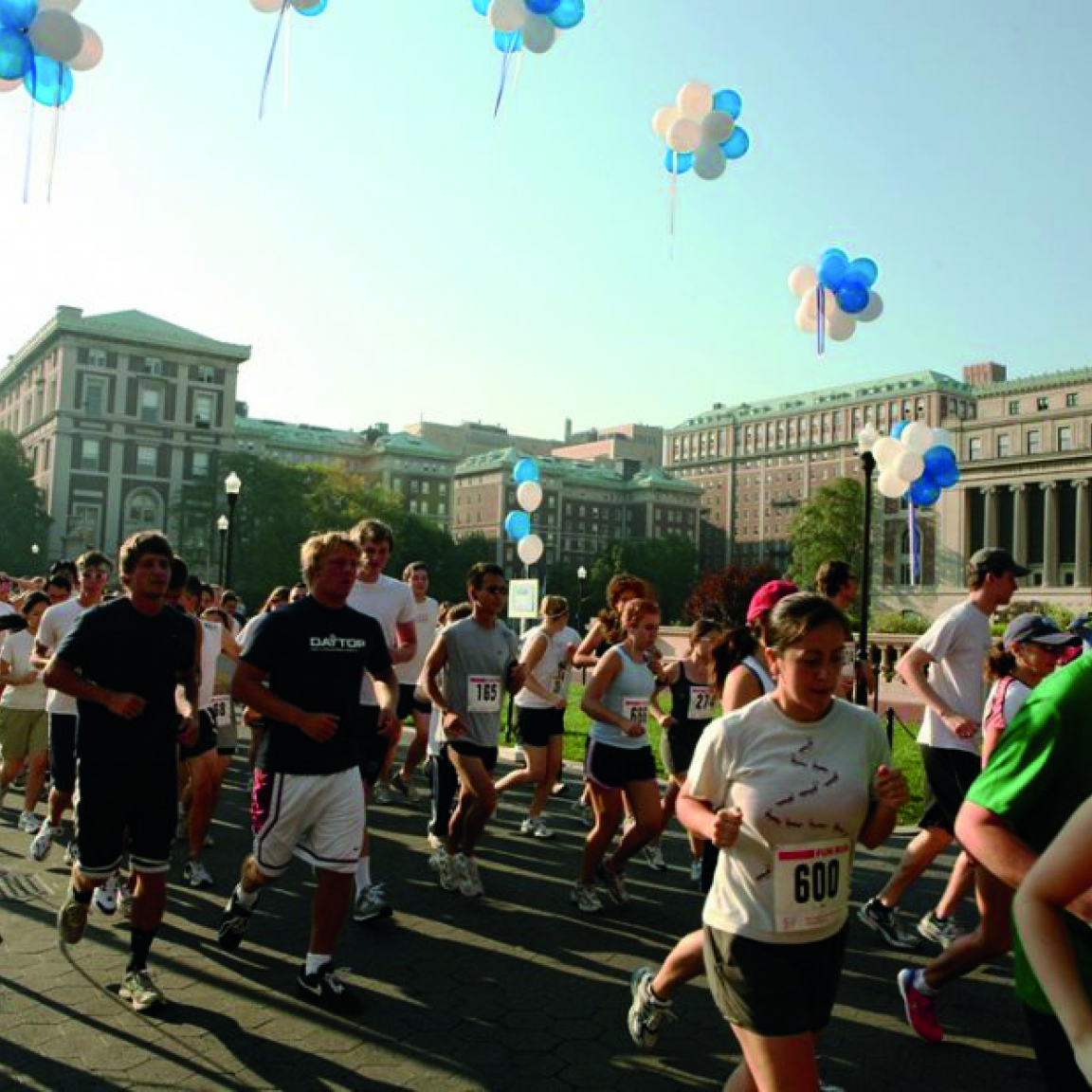 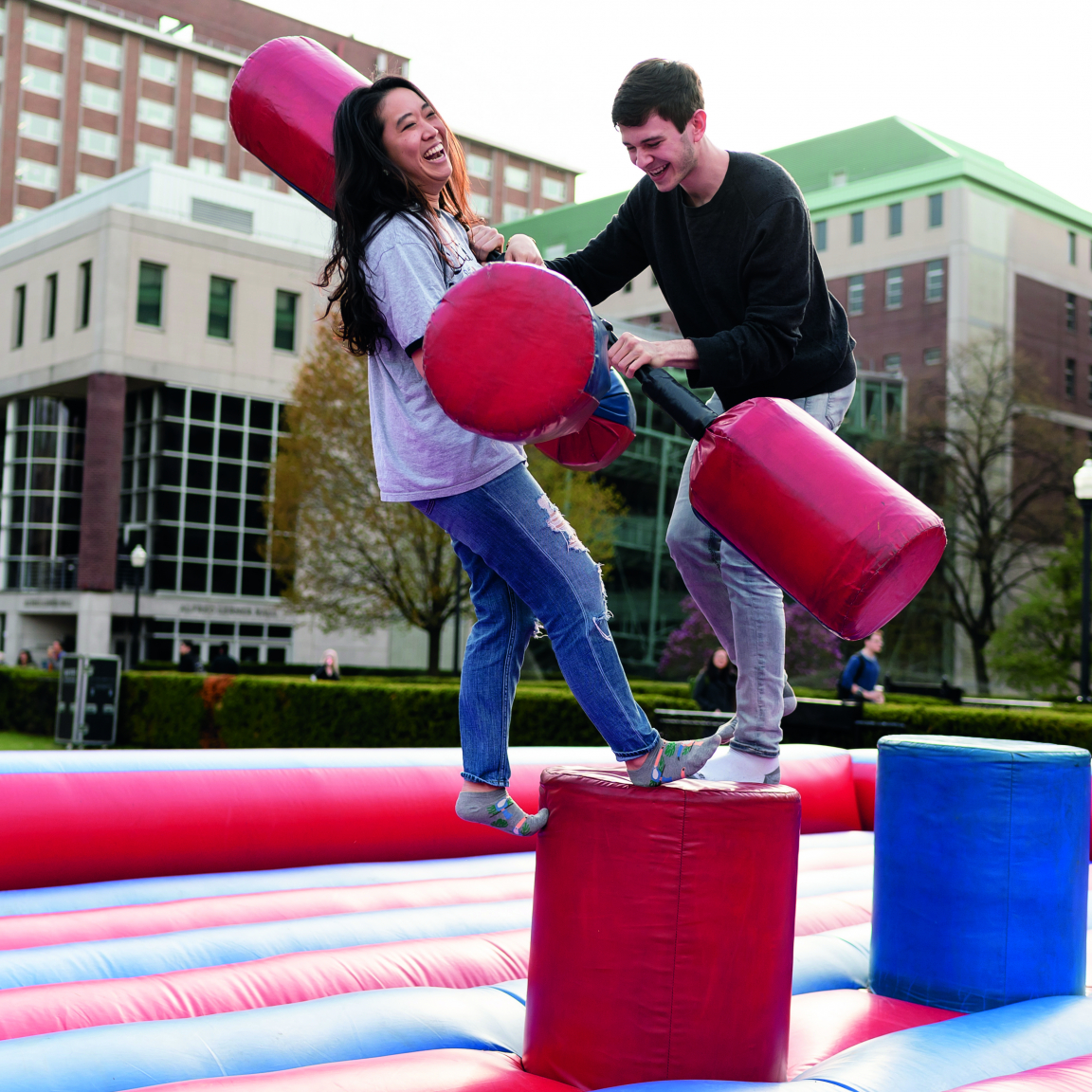 The Chinese Students Club transforms Low Steps into the famed Night Markets of China and Taiwan with two massive tents and hundreds of lights, celebrating the enchanting atmosphere and unique traditions of autumn festivals. The program showcases performances and club-run booths, modeled after the famed street markets dedicated to leisurely strolling, shopping and eating tasty snacks.

Since 1986, Columbia’s Philolexian Society has hosted the Joyce Kilmer Memorial Bad Poetry Contest. This annual event draws crowds of 200–300 participants vying for the title “Poet Laureate” of the Society. Members of the Columbia community are invited to present original works of ‘bad poetry’ before an audience of their peers and a panel of judges consisting of members of the Columbia faculty.

Every year Columbia Dining hosts a Thanksgiving feast for 1,000 students to celebrate and give thanks with their Columbia family before the holiday break. A traditional dinner of turkey, stuffing and all the trimmings is served family style in John Jay Dining Hall, where the menu includes vegan, vegetarian, halal and kosher options.

Charter Day commemorates the signing of the King’s College charter in 1754. Dean Valentini and other College administrators celebrate by offering treats, trivia and prizes to students in Hamilton Hall.

Tree Lighting Ceremony is absolutely my favorite! All the lights lit up on the trees lining College Walk become an amazing view before finals season approaches.

Just before finals week in early December, meet at the Sundial for hot chocolate and a cappella music before the countdown to the illumination of the trees along College Walk. Then enjoy one of Columbia’s oldest traditions, the lighting of the Yule Log. In a ceremony that predates the American Revolutionary War, a troop of students dressed as Continental Army soldiers carry the log from the Sundial to John Jay Hall lounge, where readings, songs and toasts celebrate the warmth and spirit of the season.

Lerner Hall is one of the main hubs on campus and features a multistory floor-to-ceiling window design. On a special Thursday night in February it transforms into the site of Glass House Rocks, a student-organized party attracting more than 2,000 students. There’s free food and drinks while dance and music groups perform on the building’s distinctive ramps. Past events have included improv sketches, laser tag and a red-carpet photo shoot.

Holi – The Festival of Colors

Each spring, Columbia’s Hindu Students Organization (HSO) hosts a Holi celebration. Holi, also called the Festival of Colors, is a Hindu holiday marking the end of winter and the beginning of spring. People traditionally celebrate by throwing colored powder at each other. HSO brought 1,500 pounds of paint to the most recent festival in which students of all faiths participated. 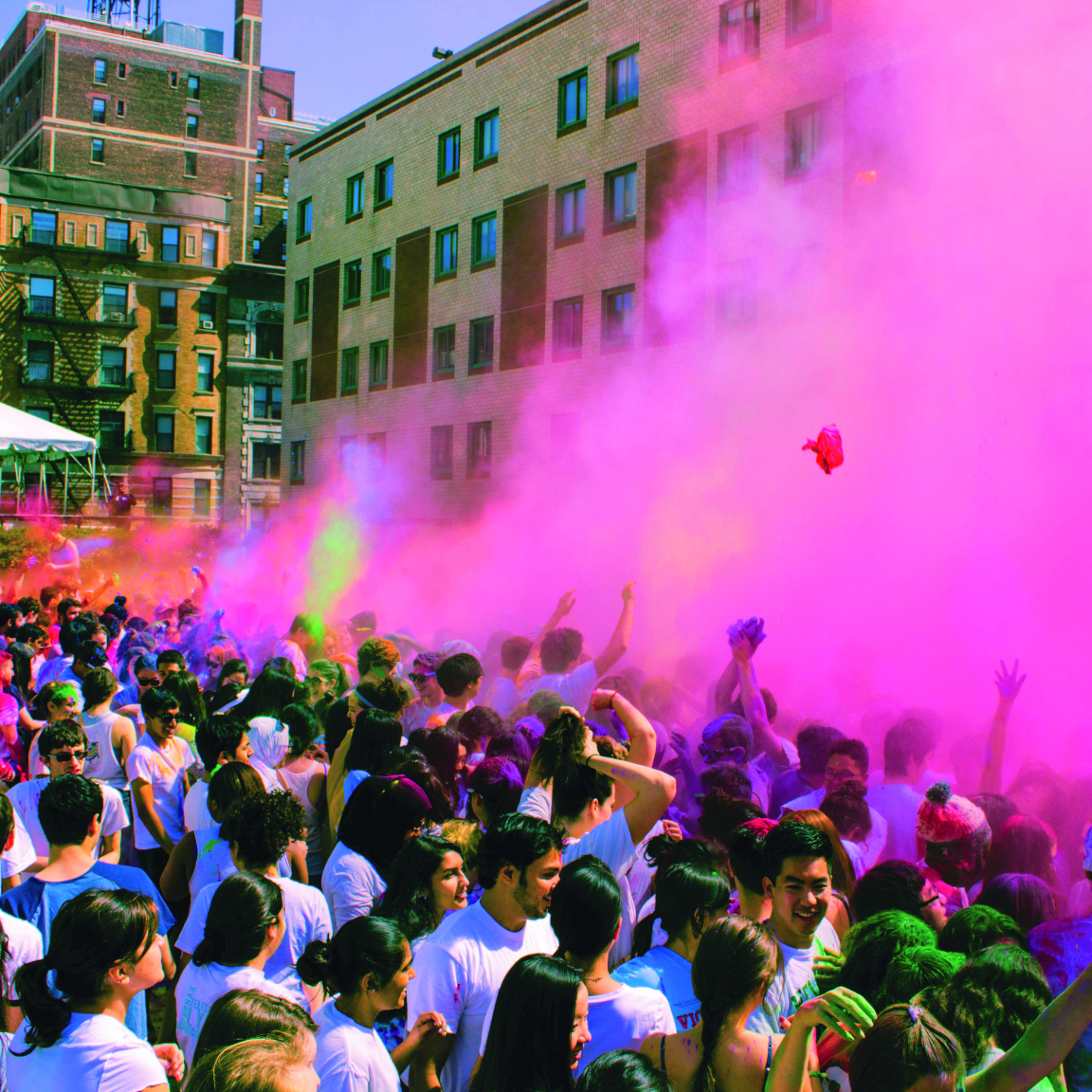 Since 1894, the Varsity Show has entertained students, faculty, and administrators by bringing laughs to Morningside Heights in an annual satire on life at Columbia. The Varsity Show is an entirely student-run production and helped launch the creative genius of Rodgers and Hammerstein as well as Kate McKinnon, Brian Yorkey and Tom Kitt.

Columbia Engineering Senior Design Expo gives the school’s seniors a chance to showcase their capstone projects. Attendees learn about the mechanics, design and engineering behind a wide range of projects and prototypes from all nine departments. Past expos have included a mechanical device that mimics the movement of a human hand, a robotic air hockey player, a device that enhances hearing protection for soldiers and a model for a soccer stadium that can withstand gale force winds and earthquakes.

Class Day Ceremonies are school-specific celebrations of the accomplishments of graduating students. Students’ names are read as they proceed across the stage and receive their class pin. Student life, academic and alumni awards and prizes are conferred to students.

Commencement is the University-wide event celebrating graduates of all Columbia schools and its affiliates. The ceremony begins with the academic procession and includes the awarding of honorary degrees, the President's address to graduates, and the conferring of degrees en masse by school.